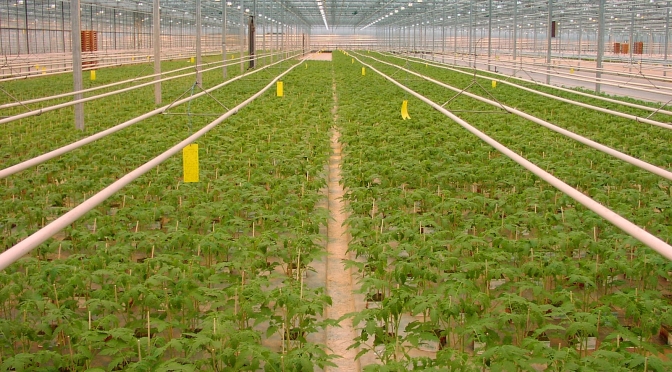 The idea of growing plants in environmentally controlled areas has existed since Roman times. The emperor Tiberius ate a cucumber-like vegetable daily. The Roman gardeners used artificial methods (similar to the greenhouse system) of growing to have the vegetable available on his table every day of the year.

The next step from the conventional greenhouse as we know it today will be the introduction of “vertical farms”. Currently, sophisticated so called “plantscrapers“ are being planned or are already under construction in Sweden, Japan, China, Singapore and the United States.

Skyscraper farming might yet be a possible answer to the question of how to feed the nine billion people that are expected by the middle of the century. These types of green-houses have a tightly con-trolled level of temperature, humidity & CO2, sophisticated watering systems and in addition to sunlight, advanced artificial LED lighting that is specifically designed and installed for each plant family. This way, the crops grow much faster and very efficiently all year round. It is estimated, that the Swedish plantscraper that is planned to be 54m high, will produce thousands of tonnes of food a year, enough to feed up to 30,000 people.

Why do we need to measure humidity?

Greenhouse humidity levels are important both in prevent-ing plant diseases and promot-ing healthy and strong plant growth. High humidity can promote Botrytis and other fungal diseases. High humidity also restricts plant transpira-tion, which in turn limits evapo-rative leaf cooling and can lead to overheating of plant foliage. If high humidity persists for a long time, the restriction of transpiration can limit the “transpiration stream” of nutrients and can lead to nutrient deficiencies.

Low humidity levels are best avoided because these may increase foliar transpiration to the extent that the root system cannot keep up. Humidity is perhaps the most difficult of the greenhouse conditions to control. Most growers simply aim to avoid the extremes of humidity. Over most temperature ranges, a greenhouse humidity of 50 – 85 %rh is generally safe. Low humidity can be managed with the use of misters and foggers. It is also useful to shade plants under conditions of low humidity to reduce the rate of transpiration.