The quality of the air in a room can greatly affect the health, productivity, and well being of any occupants. Previously the temperature and humidity of indoor air were considered as the most important parameters contributing to air quality, but there are several other factors which must be taken into account.

Indoor Air Quality (IAQ) problems are very often caused by gases or particles released into the air by pollution sources. This can be avoided by carefully selecting the materials which are to be used inside dwellings, offices, classrooms, gymnasiums, hotels, shopping malls, hospitals and in all en-closed spaces which are inhabited. But there is another source of air pollution, which cannot be avoided. this other source is people themselves. Every time a person exhales, CO2 is released. Inadequate ventilation may increase CO2 concentration to an unhealthy or even life-threatening level.

CO2: made up of 2 oxygen atoms, double bonded to a single carbon atom.

The most important control parameters for a good Indoor Air Quality are temperature, relative humidity and CO2 concentration. If these values are used with an intelligent air conditioning system, an energy efficient air supply can be used to produce a high quality atmosphere.

CO2 is a naturally occurring molecule consisting of two oxygen atoms and a single carbon atom.

At standard temperature and pressure CO2 is a gas, invisible and without any smell or taste.

CO2 is 50% heavier than air and has no liquid state under atmospheric pressure.

In the earth’s atmosphere CO2 has a concentration of 390 ppm by volume.

Influence of CO2 on Humans

Only a small amount of the atmosphere is made up of CO2, the prevailing components are nitrogen and oxygen. The natural outdoor atmosphere CO2 level is approx. 390 ppm. Increasing this concentration causes several symptoms of poisoning, ranging from drowsiness at around 1´000ppm to unconsciousness and even death at above 10´000 ppm. Even if a  rise in CO2 concentration has not yet severely influenced the health of people, it may reduce their productivity, efficiency and well-being.

Some of the possible health effects

How to Measure CO2

The most common measuring method for CO2 concentration nowadays is based on a spectroscopic principle. Sending infrared light (IR) with a wave length of 4.23 μm through a gas sample. CO2 molecules in the sample absorb the light at this wavelength. an IR sensor is then used to detect any changes in the energy levels of the light after passing through the sample. The more C)2 in the sample, the more of the light that will be absorbed, and the weaker the IR signal will be when it reaches the sensor.

Example of an IR CO2 sensor

The sensitivity of a CO2 sensor increases with the length of the light path through the sample gas. Thus the sensor used in Rotronic CO2 measuring devices makes use of multiple reflections of the IR beam on the walls of the probe chamber. this means the small CO2 sensor (2.5 cm x 5 cm) has a measuring path length of 12.5 cm and is accordingly sensitive. This type of sensor is called a NDIR (Non Dispersive Infra Red) sensor. This means that a broadband IR light source is used and the measured wavelength is filtered out at the end of the beam in front of the IR detector.

Why the Need to Measure CO2

New energy efficient demands lead to more airtight buildings and ventilation being completely turned off at night. Intelligent HVAC systems must be able to adapt themselves to situations with changing occupants of rooms. One answer is Demand Controlled Ventilation (DCV) with built-in CO2 sensors. By using DCV, huge amounts of energy can be saved without any drawback for the occupants. According to a study of the UN Climate Panel 40-50% of world energy is used in buildings. Only the adoption of the EU Directive on Energy Efficient Buildings would result in saving 30-45 MT of CO2/year. As HVAC (Heating, Ventilation and Air Conditioning) is responsible 40-65% of energy usage in commercial and public buildings, a balance between comfort and energy saving must be found. 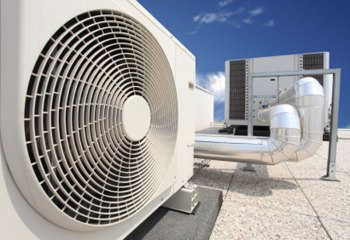 One example demonstrates the evidence of CO2 controlled room ventilation. The exhaled air of a human contains up to 40´000 ppm CO2. In one hour a person breathes out 15 litres of CO2. Thus in a classroom with a volume of 200 m³ occupied by 25 pupils the CO2 concentration increases in one hour by 1´875 ppm!

Especially in wine cellars, breweries, the beverage industry and other industries in which CO2 may be produced or processed the constant measuring of CO2 concentration is absolutely vital to prevent a deadly threat to the employees. This is not only a rational procedure but is also enforced by official regulations in nearly every developed country.