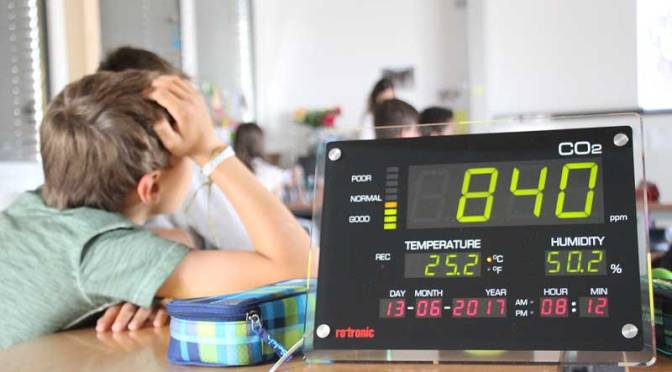 We have all had that situation when we have attended meetings, where an individuals performance has lacked. In most of these cases, this is a direct result of the poor quality of the air in the room.

Uncomfortable situations like this need not arise. CO2 displays by Rotronic make it easy to measure air quality, and the results can be used to initiate the appropriate measures. In an enclosed room, some 25 to 35 cubic metres of fresh air per person per hour are needed, given normal activities. This is a real challenge for building management systems as ventilation is costly due to the energy required but room use varies hugely throughout the day. CO2 is the best measure of use building up relative to the number of occupants, activity level and level of natural ventilation.

This ensures that the carbon dioxide (CO2 ) content remains below 1,000ppm (ppm = parts per million [value of the proportion of carbon dioxide in the air]), and that the volatile substances exuded by humans are extracted to a sufficient degree. By comparison, the CO2 concentration in outdoor air is around 400ppm. The CO2 concentration is a good indication of the quality of the air in a room.

Today, however, an adequate supply of fresh air cannot be taken for granted. In densely built-up housing areas, normal ventilation through the windows is of limited value. A good room climate cannot be achieved by regular airing in all buildings – climate regulating systems are a necessity.

Building owners and ventilation planners should therefore conform to the specifications in the SWKI Directives –“Hygiene requirements for room air systems and devices” – starting with the positioning of the air intake, through the controls of the ventilation and heating systems to the instruction of the occupiers. In the case of more complex systems, the responsibilities for surveillance and maintenance must also be clearly defined. . To keep the ventilation systems functioning reliably, and to
keep them hygienic, they must be carefully planned, constructed, regulated and maintained. Rotronic CO2 displays or CO2 transmitters can then be used to monitor and control these ventilation systems, using our  Rotronic Monitoring System live data is available at all times and alerts can be triggered if conditions are not suitable. 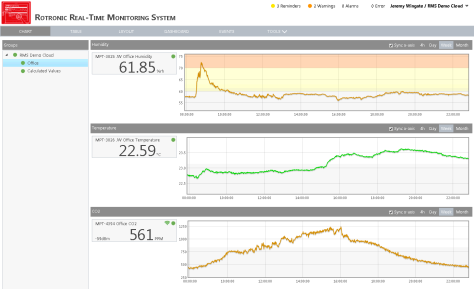 CO2 Display
The wall-mounted or bench-top CO2 display is an inexpensive display unit that simultaneously measures and records CO2 , humidity and temperature. Equipped with the field-tested and proven ROTRONIC HYGROMER® IN-1 humidity sensor, this instrument offers unbeatable value for money, ideal for existing buildings where control systems cannot easy by modified, such as schools, offices, catering areas multi-use spaces. The instrument can be configured directly with buttons, and stored data can be exported to a USB stick for analysis with the free Rotronic software package SW21.

Be sure to get in touch if you have any questions on the above or have any measurement requirements.

Stay up to date with us 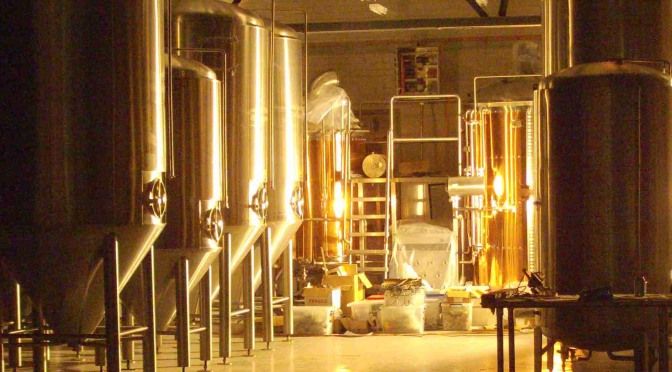 There is no exact date, as to when the first beer was brewed but already at the beginning of the fifth millennium BC, people in southern Mesopotamia, in a region known as Sumer (modern Iraq), were brewing beer.

Beer, like other commodities such as wheat and other grains, was used as a currency. A clay tablet, dating from 6’000 BC contains one of the oldest known beer recipes.

The basic ingredients of beer are: water; a starch source: which is able to be fermented; yeast: to produce the fermentation; a flavouring such as hops. Yeast is the microorganism that is responsible for fermentation. Specifically Saccharomyces cerevisiae is the species of yeast that is used for brewing.

Facts & figures:
Beer is the third most popular beverage in the world, coming in directly behind tea and water.
American beer is made mostly from rice. This was invented to give American beer a lighter taste and tap into the market of women buyers.
In the UK 28 million pints of beer are consumed every day, which equates to 100 litres per head each year.
Belgium has over 400 different beer brands.
Cenosillicaphobia is the fear of an empty glass.

There are several steps in the brewing process, which include malting, milling, mashing, lautering, boiling, whirl-pooling, fermenting, conditioning, and filtering.

Why the need to measure the carbon dioxide?

Carbon dioxide Carbon dioxide (CO2) is a naturally occurring chemical compound. It is a gas at standard temperature and pressure.

Beer brewing process: Heavily industrialised or contaminated areas may periodically have a higher concentration of CO2. Carbon dioxide is released during the beer brewing process and as you will see below, CO2 is toxic for living organisms. In brewery environments where process generated carbon dioxide is widely present, the maximum permitted carbon dioxide concentration according to most standards is as high as 5’000 ppm (5%) during an 8 hour working period.

Beer storage: Most beer leaves the brewery carbonated: beer and carbon dioxide are sealed in a container under pressure. It can be carbonated during fermentation but it can also be carbonated in the bottle. In this case the beer is allowed to ferment completely. It is left unfiltered which leaves active yeast suspended in it. A small amount of sugar is then added at bottling time. The yeast begins to act on the sugar: CO2 is released and absorbed by the beer.

Beer can also be force carbonated, in which case it is allowed to fully ferment. Then CO2 is pumped into a sealed container with the beer and absorbed by the liquid. In this case, a tank of carbon dioxide will also be required. Undetected leaks in a gas system is a costly waste and a safety risk to personnel. While small leaks are inherent in any gas system, those of significant size raise the level of economic and safety risk.

How does CO2 affect the human body?

Due to the health risks associated with carbon dioxide exposure, there are regulations and laws in place to avoid exposure! The US National Institute for Occupational Safety and Health (NIOSH) states that carbon dioxide concentrations exceeding 4% are immediately dangerous to life and health.

In indoor spaces occupied by people: concentrations higher than 1’000 ppm will cause  discomfort in more than 20% of occupants. At 2’000 ppm, the majority of occupants will feel a significant degree of discomfort and many will develop nausea and headaches.

Case study: The lake Nyos
The lake Nyos is a crater lake situated in Cameroon. In 1986, a pocket of magma from under the lake, leaked a large amount of CO2 into the air. The result was suffocation of around 1’700 people and 3’500 livestock!

As we take beer brewing seriously we will be sure to test a number of varieties with our colleagues from the world over at the Rotronic 2014 International Sales meeting in Grindelwald next week!